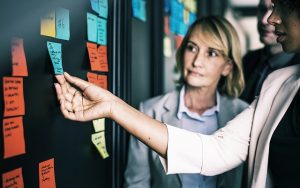 Change is hard, especially in organizations, and many people don’t want it, or at least they don’t want the discomfort that often seems to accompany it. If you’re brought in to be an agent for change, there are typically two paths that will get you there – evolution (which feels cumbersome and slow) or revolution (which is frequently accompanied by destruction, creative or otherwise, pain, and even some suffering).
If you are in a hurry to make things happen, one cause of pain is  having the right intention, but taking action in a way that makes that action seem more sinister than necessary. How do you remove a Band-Aid? Ripping it off can be hurtful and unsettling, but taking time to prepare the team (“this might sting a little, but it’s going to heal better once we put a fresh dressing on there”) lets them in on your thinking a little, and allows them to focus on the outcome, not just the action. On the other hand, telling them everything will be painless and then making the change with a “rrrrrip!” creates distrust, confusion, and fear. Fear and confusion breed questions like:

As a changemaker, your instincts may tell you to get things done quickly so your initiatives don’t stall; that’s valid. Taking a little extra time to set the stage and “p-reinforce” the benefits, though, will help you fix the situation without leaving any scars.